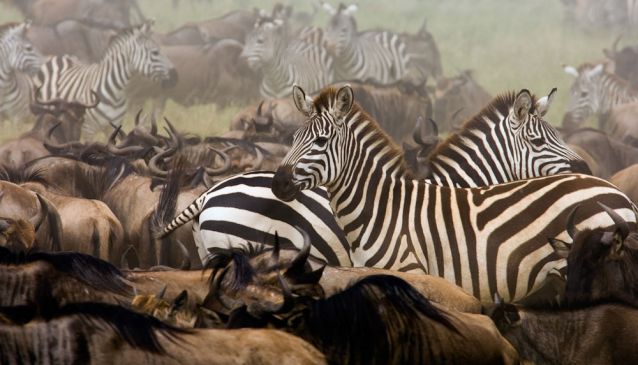 The Serengeti is one of the world's most evocative names. Calling to mind wide savannah vistas, silhouetted acacia and shimmering red sunsets, the Serengeti deserves its place at the top of the safari circuit. It is Tanzania's most popular and largest national park (14,763 square kilometres, or 5,700 square miles), bordering Kenya in the north, Ngorongoro Crater in the east and stopping just shy of Lake Victoria in the west. It was recently declared to be a wonder of the natural world and is a UNESCO World Heritage Site.

The most famous event in the Serengeti is its annual migration, where hundreds of thousands of zebra and Thomson's gazelle and millions of wildebeest move across the plains to greener pastures. The rest of the year, herds of buffalo, elephant, giraffes, eland, topi, kongoni, impala and Grant's gazelle can be spotted in the thousands, followed by prides of lions and solitary leopards, cheetahs and jackals, as well as a range of smaller predators.

The Serengeti is famous for offering encounters between predators and prey and its flat plains offer a perfect stage to watch animals interact with each other. For birders, the Serengeti does not disappoint - over 500 bird species have been recorded, from black eagles, to ostrich, to the extremely rare Beesley's Lark.

Arusha is the gateway to the Serengeti, Ngorongoro Crater, Tarangire and Lake Manyara, and most safaris in the Serengeti will begin and end there. The town can be reached easily by scheduled or charter flights directly to Arusha or connecting through Dar es Salaam. It is also accessible by road.

Serengeti National Park has a wide variety of accommodation for any budget. Check out our accommodation section for listings and details.

The annual migration can be unpredictable, so if your heart is set on seeing it make sure to allow yourself a few days of buffer room. Depending on rainfall, the wildebeest spend the wet season in the south-east and the dry season in the north-west, migrating between December and July. Contact your safari company for more information about migration times each year. To see predators, the best times are between June and October.

Apart from the obligatory safari game drives, walking and cycling safaris can also be arranged. Hot air balloon safaris are hugely popular and offer a different perspective on the part. Cultural trips to regional villages and important cultural sites with traditional rock paintings are also a highlight of the region. Neighbouring sites include Ngorongoro Crater, Olduvai Gorge, and Lake Natron.