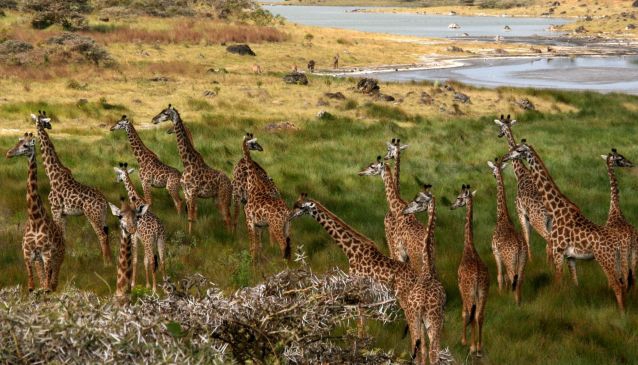 Arusha National Park is often overlooked by tourists heading to the more famous Serengeti or Lake Manyara. Those who find the times to make a visit, however, are rarely disappointed by the diverse population of wildlife just a virtual stone's throw away from Arusha. The Park is the perfect location for a half-day trip for those who are time-pressed or just dying for a little more after a northern circuit safari.

The National Park is home to a large portion of Mount Meru, the second highest mountain in Tanzania. The striking monolith towers high above the national park, whose 212 square miles encompass much of the eastern side of the mountain including the summit's 3.5 km-wide Meru Crater and the slightly smaller Ngurdoto Crater. The park also contains the shallow Momela lakes, which attract a variety of wildlife to their alkaline waters.

The National Park's wildlife includes elephants, giraffes, zebras, hippos, buffaloes, warthogs, antelopes, and primates such as playful colobus and blue monkeys. If you're really lucky, you may even spot a leopard or hyena! Arusha National Park is also a haven for birders, with almost 600 different species and a variety of plentiful butterflies.

The Arusha National Park is a 40-minute drive northeast of Arusha. Flights into either the Arusha town airport (ARK) or Kilimanjaro International Airport (JRO) are frequent and served by several airlines. The town can also be reached by road (private transportation or bus) from Nairobi or Dar es Salaam.

Arusha has a wide variety of accommodation for any budget. Within the National Park itself, there are two lodges, two mountain huts, two rest houses and camping facilities.

The best time to visit Arusha National Park is between June and February to avoid the heavier rainy season. Short rains occur in November. The best views of Kilimanjaro from the park can be found between December and February. For wildlife viewing, the park is great at any time of year.

The Arusha National Park is a perfect half-day wildlife or birding safari from Arusha town. Forest walks are well marked and there are many picnic sites within the park. Many people use the three or four day Mount Meru climb as acclimatization for Kilimanjaro, but it is a beautiful and excellent hike in its own right. Permits to climb the mountain last 12 hours and can be arranged through any Arusha tour operator.