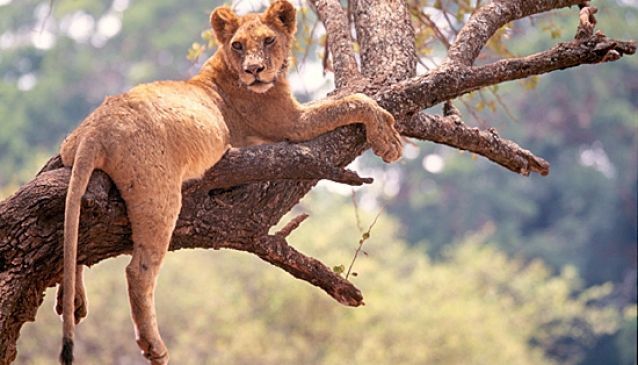 Tarangire National Park is quickly making a name for itself as a can't-miss destination on the northern safari circuit. Just southeast of Lake Manyara, Tarangire has the most wildlife concentration outside the Serengeti. Dry river beds, Rift Valley wild bushland, lagoons and swamps and savannah are all on display here, home to countless animals. The confluence of several topographies in a relatively small space leads to an impressive amount of biodiversity, with animals typically dwelling in dry bushland rubbing shoulders with typical wetland species.

Wildebeest, zebra, buffalo, impala, gazelle and other antelope species gather in astonishing numbers. Elephants have been spotted in Tarangire in herds of up to 300. Tarangire is known as one of the few parks where lions have been spotted climbing trees, along with leopards and large, prehistoric-looking pythons.

Bird lovers will be at home in Tarangire, with over 550 bird species filling it with song. The Kori bustard (the world's heaviest flying bird) and ostrich lumber impressively throughout the park, while above them countless lovebirds, starlings and migratory birds will keep birders very busy.

Tarangire is an easy drive southwest of Arusha. It's an excellent addition to a Serengeti and Ngorongoro Crater safari. Charter flights direct to the park are available from Arusha and the Serengeti.

There are several options within Tarangire itself, including lodges, one tented lodge, two luxury camps and several basic campsites. Outside Tarangire, there are several lodge and camp options.

When visiting Tarangire, take advantage of its location to visit traditional Maasai and Barabaig villages and learn a little about the culture and traditional handicrafts of the region. Ancient rock paintings are visible throughout the region and provide a fascinating day trip.

Like the Serengeti, Tarangire is a great destination year-round, but the best times to visit when the animals are overwhelmingly present is between June and September (dry season).