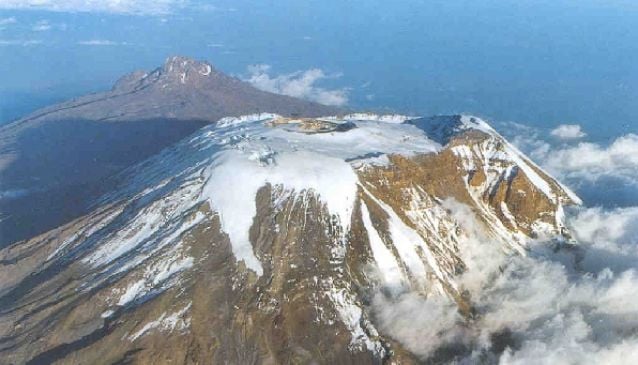 East Africa's most visually arresting landmark and the tallest free-standing mountain on this earth is the crowning glory of Kilimanjaro National Park. The Park encompasses its entire eponymous mountain above the natural tree line (approximately 2,700 metres) as well as six trailing sections of forest.

Kilimanjaro, at 19,336 feet (5,895 metres), is a breathtaking and evocative massif and is the highest peak in Africa. It is also one of the world's only summits of similar height that can be accessed by a wide range of hikers of different fitness levels and preparedness. It is one of the world's great adventures and a draw for mountaineers and thrill-seekers the world over.

The park itself displays an astounding variety of environments. At lower altitudes, mountain forest rings the snow-covered peak, providing a home for elephants, buffalo, primates, and even leopards. Climb higher and the forest is overtaken by moorland topography, with giant bluish purple lobelias in riotous bunches. Higher still and life starts to become visible only in hardy moss and lichen in an alpine desert environment. And then, the ascent takes you to a glacier of snow and ice. There you stand, on the roof of Africa.

Moshi is the jump-off point for Kilimanjaro, but it can be easily accessed within a day from Arusha (approximately 80 miles/128 kms away). It is about a one-hour drive from Kilimanjaro International Airport.

There is a variety of accommodation in Moshi that will meet most budgets.  Camps and huts are spaced throughout the park.

Climbing the famous Mount Kilimanjaro is what brings most travelers to this park. The hike takes at least five nights of acclimatization in order to avoid altitude sickness. Other hiking trails are available, with varying levels of difficulty from nature trails to mountaineering. A crater lake on the southeastern side of the mountain is a beautiful hike.

Avoid the rainy season between late February and June. The best season for visibility and temperature is between December and February.