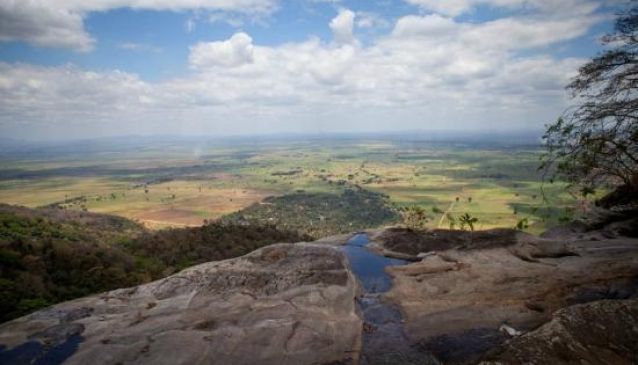 Udzungwa Mountains National Park is proof that Tanzanian tourism offers more than stellar wildlife viewing and beach destinations. The mountain chain, rising dramatically out of typical East African scrubland, is part of a series known as the Eastern Arc Mountains, known colloquially as the African Galapagos for being one of the most biodiverse places on earth. The national park encompasses Udzungwa, the largest of the mountain chains and full of a wide range of endemic plant and animal species.

The mountains are covered in a thick blanket of forest, unique in Tanzania. It's canopy forest (forest with a full top layer of cover) begins at 250 metres (820 feet) above sea level and soars straight to over 2,000 metres (6,560 feet). Udzungwa primarily attracts hikers to the region. Several trails, ranging from a few hours stroll to several night treks, slice through the forest. The most popular trek is a half-day hike to Sanje Waterfall, where waters plummet 550 feet into a thickly forested valley.

Birders will find a feather for their cap with over 400 species of birds found in Udzungwa, including four bird species found only in the park. One such species is a forest partridge, discovered only in 1991, which proved to be more closely related to its Asian counterparts than any African bird.

Other species unique to Udzungwa include two primates - the Iringa red colobus and the Sanje Crested Mangabey. The Mangabey was only discovered in 1979. Scientific exploration is ongoing in the park, with the scientific community only just beginning to reveal and understand the treasure-trove of natural wonders Udzungwa has to offer.

Udzungwa is reachable by vehicle from Dar es Salaam or Mikumi National Park.

Self-catered camping is the only in-park accommodation option. Two basic lodges are situated just outside the park entrance.

Try the half day Sanje hike (mentioned above), or for something more challenging, the two-night Mwanihana Trail ascends to the second highest peak in the mountain chain. Camping safaris are also available, though you'll find more traditional game viewing in nearby Mikumi National Park.

The park is accessible year-round, but the best time is during the dry season (June-October), as it will offer the best hiking opportunities.