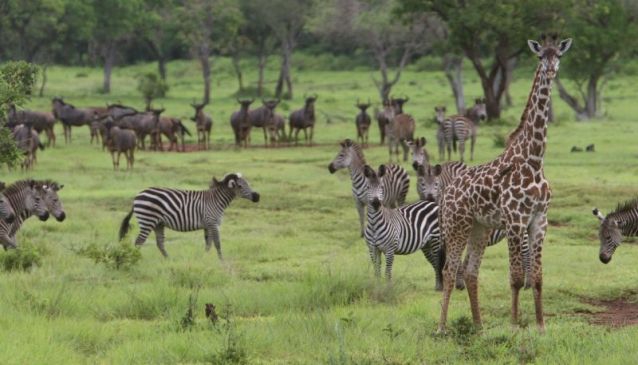 The Selous Game Reserve is quickly becoming a wildlife-viewing gem in a country full of legendary game reserves. Tucked away into a less populous and less popular Tanzanian southeast, the reserve takes up over 5% of the country's total area and is the largest wildlife reserve in Africa. It's also an easy charter flight from Dar es Salaam, making it a popular destination for weekend safaris from the big city.

The Selous Game Reserve offers up close and personal wildlife encounters in a less busy environment than the Serengeti. It's home to some of the world's last wild black rhinos and the highly endangered African wild dog, along with elephants, antelopes, giraffes, lions, and a number of marine or river dwelling animals.

The Rufiji River Delta meanders through the Reserve before emptying out into the Indian Ocean just outside park boundaries. The Delta provides a habitat and excellent viewing point for hundreds of hippos, crocodiles, and birdlife. Follow the Rufiji to where it meets the Great Ruaha River and treat yourself to the unsurpassable views of Stiegler's Gorge.

Camps, lodges and luxury resorts are all options for accommodation within the Reserve.

Because the Selous is a game reserve, as opposed to a national park (like most other Tanzanian destinations), more activities are available. Along with game drivers, walking and hiking safaris, try fly camping or a boating safari to see the wildlife of the Rufiji River Delta.

Dry season (mid-May to December) is the best time to see mammal life and action on the Delta. During the wet season (January-April), wildflowers bloom and attract countless birds to the lush green forest.