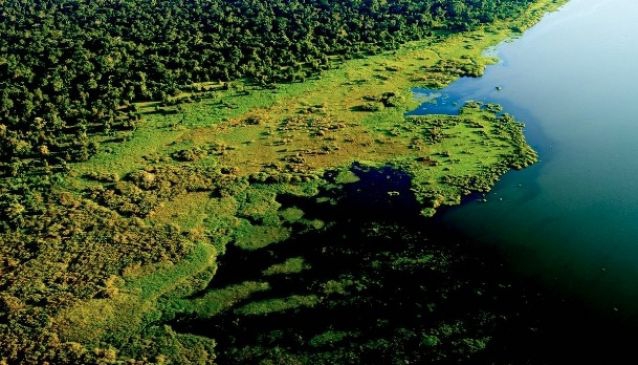 Rubondo Island National Park rises out of the southwestern waters of Lake Victoria, surrounded by tiny islands. These sentinels welcome you to one of Tanzania's most well-preserved wildlife sanctuaries.

Being an island, Rubondo's waters teem with freshwater fish. Nile perch of over100kg have been caught by recreational game fishermen. Tilapia are abundant and form the main diet of the island's resident otter population. Onshore, sandy beaches disappear into a wall of untouched forest, a lush, mysterious wood of sycamore figs, palms and tamarinds scented by wild jasmine and containing over 40 different types of orchid.

This oasis attracts a remarkable bird population, both resident and migrant. Papyrus swamps provide an excellent environment for the sitatunga, the most shy antelope species, as well as hippos and a variety of waterbird species. Mongoose, hippos and several types of monkeys are indigenous to the island, while other species such as chimpanzee, elephant and giraffe have been introduced to the isolated island.

During high season, scheduled and charter flights are available from Mwanza, Arusha, Lake Manyara, Serengeti and Dar es Salaam. Charter flights only are available during the low season. The park can be reached by road from Mwanza (includes a boat transfer to the island). The best idea is to contact Park staff before planning a trip to Rubondo for transportation details.

Park facilities for accommodation include a hostel, a campsite and self-catering bandas for visitors. One private luxury camp is operating on the island.

The best activity on Rubondo Island is simply enjoying the pristine, untouched environment. Boating and sportfishing are popular activities making the most of the Park's unique environment.

For birders, the best time to go is between December and February, when hordes of migratory birds alight upon the island. During the dry season (June to August), blooming wildflowers attract thousands of butterflies.