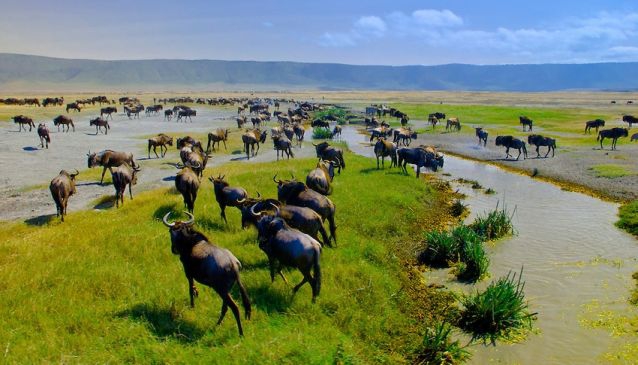 The Ngorongoro Conservation Area is quickly becoming as famous as the neighbouring Serengeti Plains for its varied habitats, famous crater and rich wildlife populations. Located between the Great Rift Valley and the Serengeti, the Conservation Area is known for almost guaranteed sightings of the Big Five (elephant, buffalo, lion, rhino and leopard).

The varied environments of the Conservation Area include plains, bush, forests, and rolling volcanic peaks and turrets. Its saline lakes are home to large flamingo populations, as well as migrant populations of birds such as cranes, storks and wagtails.

Olduvai Gorge is another main attraction of the Conservation Area. The steep ravine is the location where, in 1959, anthropologists Louis and Mary Leakey discovered a 1.8 million year old hominid skeleton. That and many other important early human fossils discovered in the gorge make Olduvai one of the world's most important anthropological sites.

Arusha is the gateway to the Ngorongoro Conservation Area, and most safaris from Arusha will include both the Serengeti and the NCA. The town can be reached easily by scheduled or charter flights directly to Arusha or connecting through Dar es Salaam. It is also accessible by road.

Arusha has a wide variety of accommodation for any budget. Within the Conservation Area, there are lodges of all types and comfort levels. Check out our accommodation section for listings and details

The population of the crater remains relatively stable year-round, making Ngorongoro a good choice for a safari at any time of year. However, the rainy season (April and May) may mean fewer people and more slippery roads.

As Ngorongoro is included in many Serengeti and area safaris, many of the same day trips apply - hot air ballooning, cultural trips and visits to other parks. The best thing one can do in the Ngorongoro Conservation Area is sit back and relax on a game drive while taking in the Big Five and one of the most unique environments in the world.