Tanzania's game viewing experiences are wildly regarded as the best in Africa!

The Serengeti is one of the world's most evocative names. Calling to mind wide savannah vistas, silhouetted acacia and shimmering red sunsets, the Serengeti deserves its place at the top of the safari circuit. It is Tanzania's most popular and largest national park.

The most famous event in the Serengeti is its annual migration, where hundreds of thousands of zebra and Thomson's gazelle and millions of wildebeest move across the plains to greener pastures. The rest of the year, herds of buffalo, elephant, giraffes, eland, topi, kongoni, impala and Grant's gazelle can be spotted in the thousands, followed by prides of lions and solitary leopards, cheetahs and jackals, as well as a range of smaller predators.

The Serengeti is famous for offering encounters between predators and prey and its flat plains offer a perfect stage to watch animals interact with each other. For birders, the Serengeti does not disappoint - over 500 bird species have been recorded, from black eagles, to ostrich, to the extremely rare Beesley's Lark. 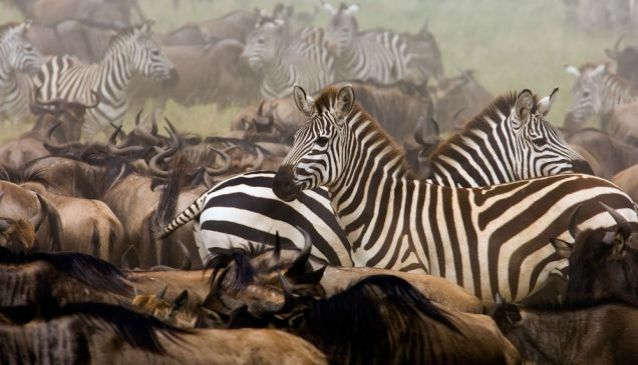 The Ngorongoro Conservation Area is quickly becoming as famous as the neighbouring Serengeti Plains for its varied habitats, famous crater and rich wildlife populations. Located between the Great Rift Valley and the Serengeti, the Conservation Area is known for almost guaranteed sightings of the Big Five (elephant, buffalo, lion, rhino and leopard).

The varied environments of the Conservation Area include plains, bush, forests, and rolling volcanic peaks and turrets. Its saline lakes are home to large flamingo populations, as well as migrant populations of birds such as cranes, storks and wagtails.

Olduvai Gorge is another main attraction of the Conservation Area. The steep ravine is the location where, in 1959, anthropologists Louis and Mary Leakey discovered a 1.8 million year old hominid skeleton. That and many other important early human fossils discovered in the gorge make Olduvai one of the world's most important anthropological sites. 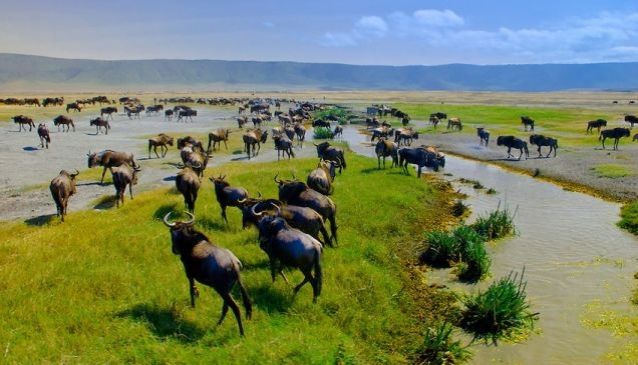 The Selous Game Reserve is quickly becoming a wildlife-viewing gem in a country full of legendary game reserves. Tucked away into a less populous and less popular Tanzanian southeast, the reserve takes up over 5% of the country's total area and is the largest wildlife reserve in Africa. It's also an easy charter flight from Dar es Salaam, making it a popular destination for weekend safaris from the big city.

The Selous Game Reserve offers up close and personal wildlife encounters in a less busy environment than the Serengeti. It's home to some of the world's last wild black rhinos and the highly endangered African wild dog, along with elephants, antelopes, giraffes, lions, and a number of marine or river dwelling animals.

The Rufiji River Delta meanders through the Reserve before emptying out into the Indian Ocean just outside park boundaries. The Delta provides a habitat and excellent viewing point for hundreds of hippos, crocodiles, and birdlife. Follow the Rufiji to where it meets the Great Ruaha River and treat yourself to the unsurpassable views of Stiegler's Gorge. 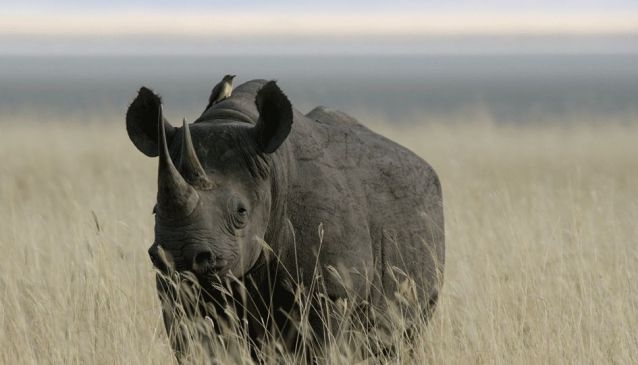 Tarangire National Park is quickly making a name for itself as a can't-miss destination on the northern safari circuit. Just southeast of Lake Manyara, Tarangire has the most wildlife concentration outside the Serengeti. Dry river beds, Rift Valley wild bushland, lagoons and swamps and savannah are all on display here, home to countless animals. The confluence of several topographies in a relatively small space leads to an impressive amount of biodiversity, with animals typically dwelling in dry bushland rubbing shoulders with typical wetland species.

Wildebeest, zebra, buffalo, impala, gazelle and other antelope species gather in astonishing numbers. Elephants have been spotted in Tarangire in herds of up to 300. Tarangire is known as one of the few parks where lions have been spotted climbing trees, along with leopards and large, prehistoric-looking pythons.

Bird lovers will be at home in Tarangire, with over 550 bird species filling it with song. The Kori bustard (the world's heaviest flying bird) and ostrich lumber impressively throughout the park, while above them countless lovebirds, starlings and migratory birds will keep birders very busy. 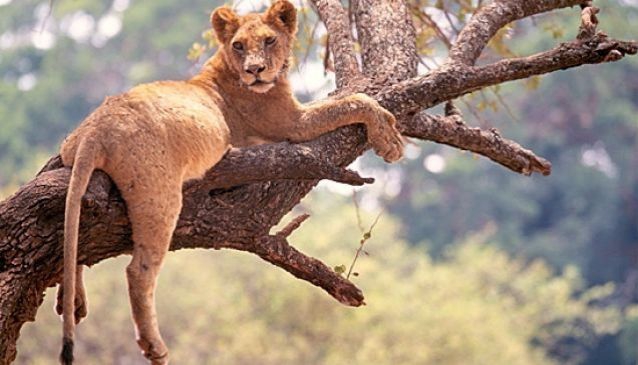 Some safari goers want nothing but vast plains, miles of bush and a plethora of animals. For those travelers, the wide vistas, impressive game viewing, and sparse visitors of Ruaha National Park are a dream.

At over 10,000 square kilometres, Ruaha is the largest national park in the country, located west of Iringa in the Eastern Rift Valley. The Great Ruaha River borders the park to the east, fertilizing the semi-arid topography during the torrential rainy season. During the dry season, the waters of the park recede, leaving only precious pools to satisfy both predators and prey. During the dry season, the park can look like a lifeless mass of dirt and rock, but look closer - an impressive variety of game animals make their home in the park.

As with most Tanzanian parks, a remarkable number of bird species are found in the park - some 450. The convergence of acacia grassland and semi-arid bushland make Ruaha a meeting place for birds from a variety of habitats. 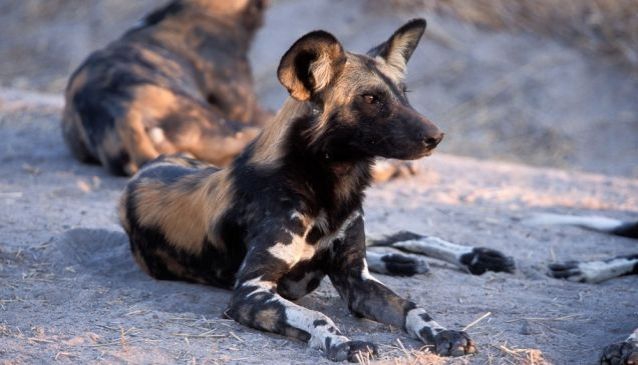 Lake Manyara National Park is one of the safari circuit's main attractions and is typically packaged with the Serengeti and Ngorongoro Crater. The lake's watershed creates a rich, green environment on a stage set by amazing views of the Great Rift Valley's western escarpment. Though the park is small (127 square miles (200 square kms), over half of which is covered by the lake during the wet season), it offers an excellent opportunity to view wildlife in lake and forest habitats.

The majority of the park's topography is forest or heavy vegetation, allowing animals to roam more privately and making viewing more intimate. Other habitats include swamp, acacia, plains and the lakeshore.

In these varied environments, elephant, buffalo, zebra, giraffe, warthog and a variety of ungulate species can be found. The park's hippo population is impressive. Predators include leopards and the park's famous tree-climbing lions.

For birders, more than 400 species can be found in astonishing volume and variety. Lake Manyara is home to thousands of pink flamingos. Hot springs are also found in the southern section of the park. 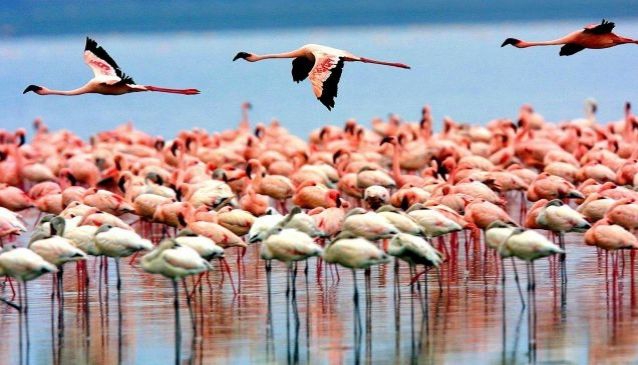 If you're feeling tired of the tourist scene in the safari circuit, Katavi National Park will without a doubt cure what ails you. The park is isolated and difficult to get to, but rewards the dedicated visitor with almost unparalleled wildlife viewing during the dry-season.

The park is Tanzania's fourth largest at 2795 square miles (4471 square kms). While no scenery in Africa is boring, it is less spectacular than the Serengeti, until you get a glimpse of the park's residents. Abundant throughout the year, the park's rich wildlife population concentrates in spectacular number and variety when water sources recede during dry season. Elephant, giraffe, zebra, lion, eland, gazelle, and many more can be seen, as well as over 400 bird species.

The feather in Katavi's wildlife-viewing cap, though, is certainly the hippo pools. As the dry season goes on, water recedes further and further, forcing hippos to gather in ever-tighter spaces. The famously aggressive animals can only take so much close contact, and fights and rivalries between male hippos are frequent and bloody. This rare (in other parks) scene is a unique opportunity to view the raw power of some of Tanzania's most notorious animals. 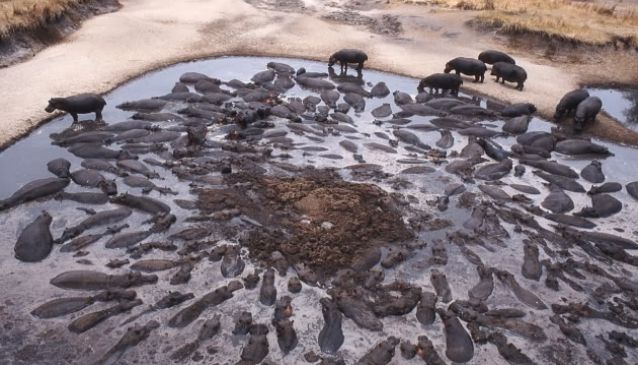 Mikumi National Park is the fourth largest in Tanzania and adjacent to the Selous Game Reserve, Africa's largest reserve. The park is southwest of Morogoro and ringed by the Uluguru, Rubeho and Udzungwa Mountains. Topography of the park includes thick woodland, grass plains and mountainous foothills.

Colourful birds (over 400 species) flit about the park throughout the year, joined seasonally by migratory birds from Europe. The park is host to an impressive elephant population, along with easily spotted zebra, giraffe, wildebeest, impala and buffalo. The park's Mkata River provides shade and grazing for the park's herbivore population, and the Mkata floodplain virtually guarantees a spotting of the largest antelope in the world, the eland. Lions can be found as well for the lucky and dedicated viewer.

Along with Lake Manyara, Mikumi is one of the few places in Tanzania where lions have been found climbing trees to escape wet earth during the rainy season. 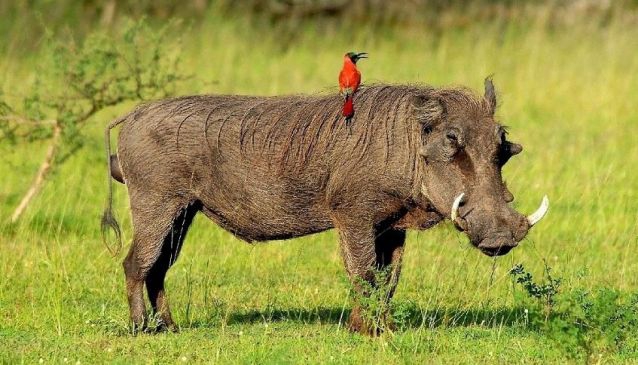 Arusha National Park is often overlooked by tourists heading to the more famous Serengeti or Lake Manyara. Those who find the times to make a visit, however, are rarely disappointed by the diverse population of wildlife just a virtual stone's throw away from Arusha. The Park is the perfect location for a half-day trip for those who are time-pressed or just dying for a little more after a northern circuit safari.

The National Park is home to a large portion of Mount Meru, the second highest mountain in Tanzania. The striking monolith towers high above the national park, whose 212 square miles encompass much of the eastern side of the mountain including the summit's 3.5 km-wide Meru Crater and the slightly smaller Ngurdoto Crater. The park also contains the shallow Momela lakes, which attract a variety of wildlife to their alkaline waters.

The National Park's wildlife includes elephants, giraffes, zebras, hippos, buffaloes, warthogs, antelopes, and primates such as playful colobus and blue monkeys. If you're really lucky, you may even spot a leopard or hyena! Arusha National Park is also a haven for birders, with almost 600 different species and a variety of plentiful butterflies. 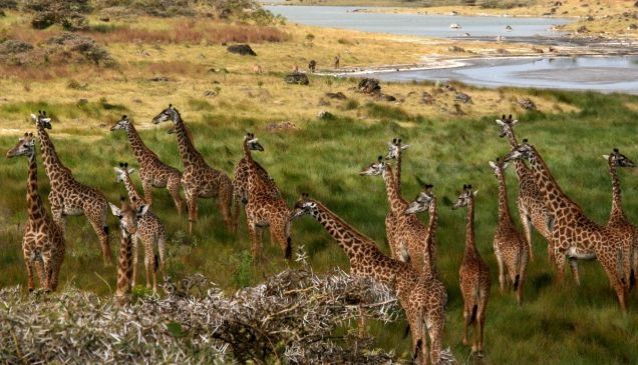