Now and Then 'The Bububu Railway'

Those wishing to catch a glimpse of the island could use a special first-class coach.

More than 100 years ago, one could have heard a train slowly rolling through the villages of Zanzibar when the island played host to the first steam locomotive in East Africa.

In 1904 the Zanzibar Government signed a contract with the American firm, Arnold Cheney and Co. to build the famous Bububu Railway. A tiny steam engine ran along a light railway, approximately seven miles long from the Arab Fort in Zanzibar Town, before passing the sea front and reaching the coastal village of Bububu.

The service was most popular and very useful during a period where roads were less established on the island. It was largely used by the native population as a mode of transport while providing a constant source of wonderment for passing crowds. Those wishing to catch a glimpse of the island could use a special first-class coach.

Surprisingly, the railway became an important part of the general electrification of the island.

During its construction the Americans undertook the task of installing electrical power lines along the track. Wherever the rails were placed, metal poles were installed and power lines strung overhead. By 1906, long before even London obtained them, Stone Town had electric street lights.

In 1911, the railway was sold to the Government, and by 1922 the passenger service ceased. As roads improved and motor vehicles on the island increased, its popularity diminished. Consequently, the railway was then converted into an important component for the haulage of stone which was used to build the port and helped reclaim the sea- front. After 25 years of operation the railway was closed in 1930.

Today the Bububu railway no longer exists as result of growth and development on the island. However, train enthusiasts can still see remnants of the railway’s bridges and embankments from Zanzibar’s main roads. 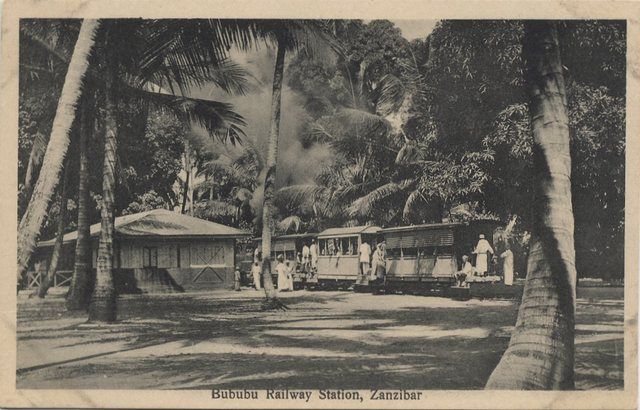