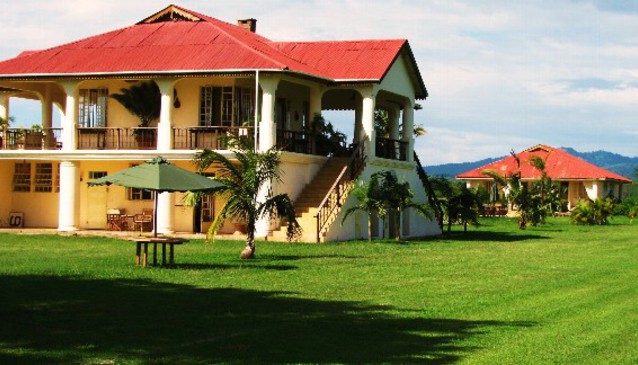 Situated outside Arusha, The Nduruma Polo and Country Club on Dolly Estate is the social hub for the Usa River community. The size of the ground at that time and the scarcity of polo ponies dictated polo Crosse instead of polo. However, as more interest grew, the Club switched to polo but for a long time it was played on the same dusty, minute piece of land as before with magnificent views of Mt Meru, brooding over the ground and rising up starkly to 15,900 feet. The more majestic Mt Kilimanjaro some 80 km away could be seen clearly on many days.

Via a further switch to another adjacent ground, which was bigger but still not of the regulation size, Jerome Bruins conceived the idea of making a polo ground the centre piece for a large scale residential development project. Central to this was the construction of a magnificent club house set between two full size grounds. Polo grounds occupy about 10 acres or approximately 3 football pitches and once again the mountains of Meru and Kilimanjaro provided stunning views.

With full size grounds, the Club was comfortably able to compete with neighbouring clubs in Kenya and now hosts a hotly contested international tournament every October. Membership has grown exponentially and so too the level of play. Junior players as young as ten compete on level terms with adults much older and bigger - and to the chagrin of the old - often come off much the better for it.

Polo is an exhilarating game usually requiring 4 players per side and a minimum of 2 horses playing hard and fast over 7 minutes per chukka - that being the name of each period - a term derived from India, where Polo traces its roots. Spills are thankfully rare but they provide a heart stopping distraction to the stunning estate and mountain views and enjoyment of the facilities: swimming pool, tennis courts and golf driving range. There is a burgeoning hockey section that meets every Wednesday. A gym is available to tone up the riding muscles and a wonderful masseuse can be booked to ease the aches and pains especially for those occasional players.

Practice chukkas are played every Wednesday, Saturday and Sunday and are proceeded usually by social drinks on the sultanate style veranda gazing at magnificent sunsets, often accompanied by antelope such as Grants Gazelle grazing safely on the polo ground. There are facilities for horses to livery overnight but most horses are locally stabled and so return as soon as the games are over. On Dolly Estate, where the Club is located, horses returning at night have been known to seek a detour around Leopard who they meet as they start their night patrols.

Tournaments are played monthly during the season and the club maintains a strict policy of including all ages and levels of experience. The games are invariably hard fought, often sponsored, which adds to the pomp and provides for welcome prizes including most valuable player and best playing pony. Barbecues with lamb and pork on the spit are usually the order of the night and Sunday lunches often revolve around a delicious curry; all washed down with the excellent beers to be found in Tanzania and wine from around the world.