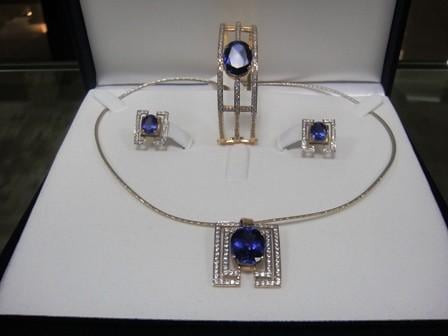 We at Collectors Corner, with our main quest being to satisfy the requirements of our customers, have been cutting and exporting coloured gemstones to the U.S.A. and European markets for over three decades.

The gemstone discoveries in mineral rich East Africa in the 1960's, transformed the jewellery world incredibly: new varieties, new colours, and new variations on existing species, made that decade the most exciting time in recent gemstone history.

No other gem discovery in East Africa has had more impact on the world gemstone market, than that of Tanzanite, a rare gemstone only found in Tanzania!

Tanzanite and Tsavorite, the beautiful and dazzling crown jewels of our East African collection, are but only a part of our anthology of fine colour gems, and stand firm next to their counterpart range of Ruby, Tourmaline, Garnet, Spinel, Sunstone and more.

One of the most beautiful and now renowned and coveted blue colour gemstones of our planet; it is considered by some to have bolder colour and finer clarity than a Sapphire.

Certificates are issued with all cut Tanzanite purchased from Collectors Corner. Certification endorsed by Tanzanite Foundation is based on their quality grading scale.

A truly exquisite gemstone, of stunning vivid green colour and possessing a natural beauty that requires no 'treatment' to enhance it. This gemstone is bright, lively, with a high refractive index, fine clarity and a garnet's distinctive durability.

A fascinating gem abounding in vivid reds, hot pinks, verdant greens, blues, and yellow colour bursts. With earth tones as rich as an African sunset, these gems come in an incomparable variety of shades. Egyptian legend has it that on its long journey up from the centre of the earth, Tourmaline passed over a rainbow and in doing so, assumed all its hues. The reason perhaps, for the romantic mystic reference to Tourmaline being 'The Rainbow Gemstone'.

The great pretender, is seen in the Imperial Crown of England masquerading as a Ruby. It is a favourite of gem dealers and collectors because of its brilliance, hardness, and wide range of spectacular 'hot' hues - from bold rich reds to a range of striking shades of pink and purple. Fine Spinel; now rarer than the Ruby it used to imitate, and yet, more affordable.